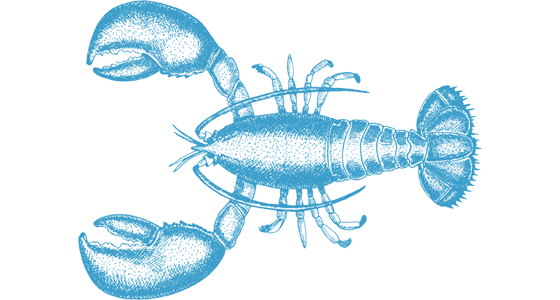 There’s much more to lobsters than a fancy dinner entree! Known for their flashy claws and tasty meat, American lobsters make up a huge industry with millions of pounds harvested every year. Lobsters are in the subphylum Crustacea, which also includes crabs, shrimp, crayfish and krill. They are invertebrates, meaning they don’t have a spine, and instead rely on their tough outer shell for protection and stability. Once a lobster gets too big for its shell, it will shed and grow a new one in a process called molting. They must be very careful in the months they’re waiting for the new shell to grow because they are more susceptible to predators during that time. They must watch out for other lobsters, too—they can be territorial and will fight each other to establish dominance.

Lobsters have intriguing mating habits. A female will excrete a type of chemical called a pheromone to let male lobsters know she’s ready to pick a suitor, typically the alpha male of the community. Then, she will enter the male’s den and participate in “lobster boxing” (yup, it’s exactly what it sounds like). Then, after the female molts, she’s ready to mate. She’ll stay in her mate’s cave until her shell grows back, then off she goes! Females will produce thousands of eggs at once and keep them tucked away under their tails for up to a year!

Lobster may be considered a high-class dinner now, but that wasn’t always the case. There was even a law passed in the 18th century that forbade people from feeding lobster to their servants more than twice a week!

Lobster populations have been growing in some areas like the Gulf of Maine, as waters warm and their natural predators, Atlantic cod, decline. They’ve also been declining in other areas like southern New England, where waters are warming enough to cause problems—if waters exceed 70 degrees Fahrenheit, it can be fatal. That’s bad news for all of the American lobster’s range—the Gulf of Maine, for example, is warming 99% faster than other parts of the ocean. The collapse of the fishery would have devastating consequences for the ecosystem and the communities who rely on a healthy, sustainable lobster fishery.