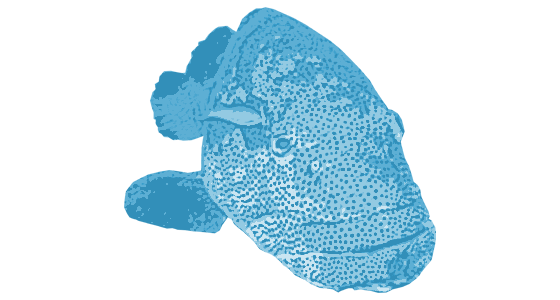 The oldest recorded was 37, but scientists estimate goliath groupers can live up to 50 years

Rocky, coral and mud bottoms in marine waters up to 150 feet. Juveniles can also be found in brackish waters.

Western Atlantic Ocean from Florida to Brazil, the Caribbean and the Gulf of Mexico

Goliath grouper are some of the biggest fish in the sea—they can grow more than eight feet long and weigh up to 800 lbs! Goliath grouper also has a big presence in a healthy coral reef ecosystem, as they help maintain balance as a top predator. They use their large mouths to suck in whole fish or invertebrates, then swallow them right away.

Although goliath groupers are solitary most of the time, they gather in large numbers during breeding season. They use the lunar cycle as their guide and spawn between July and September. When it’s time to spawn, they gather in massive groups of 100 or more individuals then participate in broadcast spawning, meaning the males release sperm and the females release eggs into the water column at the same time. After they’re fertilized, the eggs drift around in the currents until they finally hatch.

Goliath grouper can get very territorial and will defend their space by opening their mouths aggressively and making a low rumbling sound.

Goliath grouper were historically overfished, and their numbers decreased by about 80%. Their massive spawning events made it easier for fishers to catch them in big numbers. As a result, goliath grouper were managed under a rebuilding plan where harvest was prohibited. It’s been a long road to recovery, largely because their populations are slow to rebound because of their slow growth rate and late age of maturity. Thankfully, their numbers have improved, and they are no longer considered critically endangered, but now are considered “Vulnerable” to extinction by the IUCN.