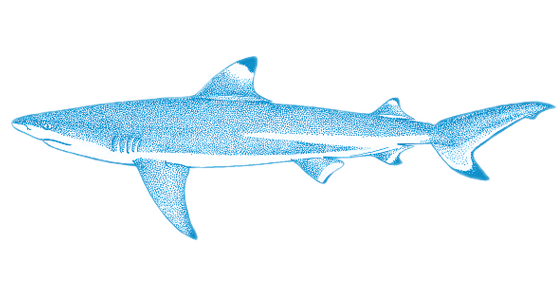 They prefer small fish, but sometimes eat crustaceans, mollusks and other invertebrates

Like other sharks, blacktip reef sharks sport a sheath of tooth-like scales called denticles covering their skin. These help them stay streamlined so they can swim quickly through the water. Denticles also help protect sharks from parasites. Blacktip reef sharks are viviparous, meaning they produce live pups instead of eggs, and birth up to four pups each year. The pups reach maturity around four years old for males and seven years old for females.

Blacktip reef sharks live and hunt in and around the edges of reefs because there is an abundant supply of food. They’re not as menacing as they might seem. While they might be curious about divers swimming in their territory, they are quite timid and easily frightened.

Blacktip reef sharks can jump fully out of the water during feeding frenzies.