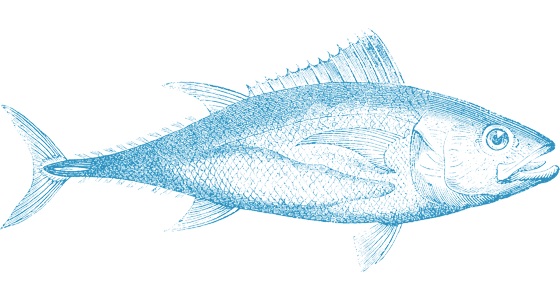 Northern bluefin tuna are found throughout the North Atlantic Ocean. They can sustain cold and warm temperatures and frequently dive to depths of 500 to 1,000 meters. Spawning habitat for the western population is in the Gulf of Mexico, while the eastern population spawns in the Mediterranean Sea.

They live in saltwater or marine habitats and tend to favor tropical, subtropical and temperate waters. This includes the Atlantic Ocean, Pacific Ocean and Indian Ocean. They tend to spawn between July and October, which is the time when most fisherman fish for them.
Bluefin tuna populations have declined severely from overfishing and illegal fishing over the past few decades –not just Atlantic bluefin tuna, but also Pacific bluefin tuna and Southern bluefin tuna. Population declines have been largely driven by the demand for this fish in high end sushi markets.

Bluefin are the largest tunas and can live up to 40 years. They migrate across all oceans and can dive deeper than 3,000 feet.
Share This