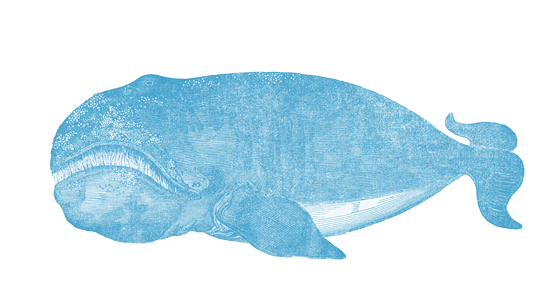 The upper northern hemisphere, including in the Bering Sea and Chukchi Sea

Mostly zooplankton, which are tiny non-swimming organisms like copepods and euphausiids, and other invertebrates and fish

Bowhead whales’ name comes from the shape of their jaw, which resembles an archer’s bow. Their skulls can be more than 16.5 feet long—about 30-40 percent of their entire body length! Clocking in at 75-100 tons, bowhead whales are among the heaviest animals on Earth, second only to the blue whale.

They are baleen whales, which means instead of teeth, they have about 350 large baleen plates that filter seawater so they can eat small animals like zooplankton. Unlike many other whales, they don’t migrate long distances for the winter. Instead, they stay in the Arctic all year. Bowhead whales are well-adapted to the cold Arctic winters because they have a very thick layer of blubber that helps they stay warm. They mostly travel alone, but on rare occasions they will travel with others in a small pod.

Bowhead whales spend a lot of time under the ice. They use their massive skulls to break through the ice with their heads. Their ice encounters lead to their fair share of scars, and these scars help scientists tell individual whales apart. Scientists need all the help they can get because bowhead whales spend so much time under water and ice that they’re difficult to study and track.

Bowhead whales are some of the longest-living animals on Earth—scientists believe they live up to 200 years!

Although many species of whale are at risk, bowhead whales are in pretty good shape. They are considered of “least concern” by the IUCN, meaning they are not threatened or endangered. They’re not out of the woods, however, they are threatened by oil and gas drilling, increased shipping activity and climate change. As Arctic ice melts from climate change, the threats to bowhead whales and other Arctic species will likely increase.