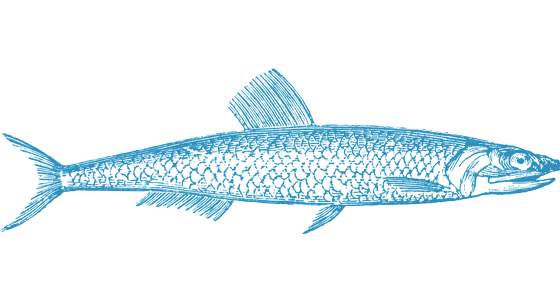 About four years, but the oldest recorded was seven

In large schools along coastal waters

In the Pacific Ocean from British Columbia to Baja California

Don’t let the anchovy’s small size fool you—they play a BIG role in the ocean. The Californian anchovy is known as a baitfish or forage fish, meaning they are a favorite meal of larger, predatory fish. That also means they are a crucial link in the ocean food web. They eat small plankton, then, in turn, provide energy for bigger fish, birds and mammals. A lot of species depend on the Californian anchovy. For example, the breeding success of California brown pelicans and terns, depends on healthy populations of anchovies!

Californian anchovies are an important part of the fishing industry, too. Not only do people eat them, but they’re also used for bait and pet food. Scientists, fishers and policymakers are concerned with keeping enough of baitfish in the ocean to support healthy ecosystems and a healthy fishery.

Californian anchovies employ an interesting strategy to avoid being someone else’s lunch. They swim in massive schools, sometimes numbering in the thousands. With all of them moving at once, it makes it harder for a predator to focus on just one.

If you ever see an anchovy “yawning,” it’s because they’re hungry! They open their mouths wide to filter tiny phytoplankton and zooplankton from the water.

There isn’t enough data on their populations to know exactly how healthy they are. Although the rate of fishing has decreased since the high levels of the 1980s, setting accurate catch limits is tricky because of their “boom-and-bust” population cycles. Their numbers are likely affected by upwelling events and water temperature, which means that climate change could negatively affect population levels.