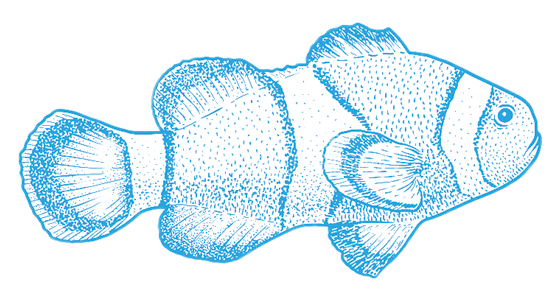 In the Red Sea, Indian Ocean and western Pacific

Clownfish are omnivores, which means they eat both plants and animals. They consume plankton, algae and small invertebrates.

You probably recognize clownfish by their colorful appearance. Clownfish species come in a range of colors, but the best-known clownfish (of more than 30 species) is orange with white stripes. Clownfish live in a symbiotic relationship with a host anemone. This means that while clownfish enjoy the protection and the food scraps of the anemone, they, in turn, fend off intruders and help keep the anemone clean by removing parasites and dead limbs. It’s a win-win situation for both animals! Clownfish won’t settle in just any anemone, however. Only about 10 of more than 1,000 anemone species are suitable hosts. The mucus layer on clownfish skin gives them immunity to the anemone’s stinging nematocysts. Before they can live in an anemone, clownfish first must become acclimated to its sting by gently touching the anemone’s tentacles. Other fish do not have the same protective mucus layer, so the host anemone helps deter potential clownfish predators.

All clownfish are born male. Some individuals will switch to female later in life.

Climate change and ocean acidification are threats to clownfish and their habitat. As seawater acidifies, it is harder for clownfish to correctly identify smells and sounds that usually help them navigate their habitat and recognize predators. This can lead them to demonstrate risky behaviors.