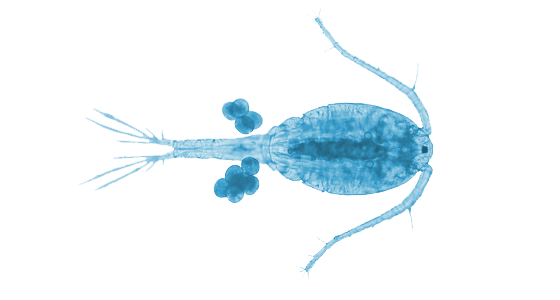 Six months to a year

Throughout the ocean, including both the water column and seafloor, and in other aquatic environments like swamps, springs and ponds

Phytoplankton, bacteria and other detritus

Copepods are tiny crustaceans known as the “insects of the sea.” The name “copepod” means oar-footed, and which comes from how they move through the water. They use their four to five pairs of legs and even their mouth and tail to swim. Copepods are everywhere in the ocean, including the water column. There are more copepods than any other multi-cellular organism.

Copepods come in many forms—some are filter feeders; some grab their prey directly. All have two major life forms and grow by shedding their shells. Copepods can go through 12 life stages after hatching—that’s a lot of wardrobe changes!

Let’s take a closer look at copepods in one ecosystem in particular: the Arctic. In the Arctic, they live on the seafloor, in the water column, on the sea ice surface or in sea ice channels. Copepods are the critical base of the food chain in the Arctic. Even very large animals (like bowhead whales) prey on them. They are also a food source for species like polar cod, which, in turn, feed other iconic Arctic species like ribbon seals.

There are more than 150 species of copepod in the Arctic. The most abundant and largest is Calanus hyperboreus, a filter feeder with red highlights on its antennae. In the deep of winter, males fertilize the females and then die off. Females then survive on stored-up reserves of large fat deposits to make it through the winter.

While they might not be as cute and snuggly as the larger, more charismatic critters who depend on them, copepods are an essential foundation for life in the Arctic.

Copepods are small, but mighty. They only grow to about 0.3-2 cm long at full size!

Climate change threatens to greatly affect copepods populations around the world. Warming, acidification, habitat loss and eutrophication (excess nutrients) can result in declines in copepod abundance, which has drastic consequences for the animals higher in the food web who rely on them. But that’s not all—a study found that copepods who consumed a toxic algae found in red tides engaged in “riskier” swimming behaviors that made them more susceptible to predators.