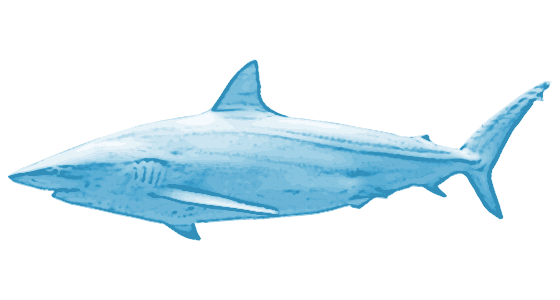 From shallow inshore waters out to the continental shelf

The Western Atlantic, Caribbean, Gulf of Mexico, the Pacific and the Mediterranean

Bony fish like bluefish, tuna and grouper, as well as crabs, octopuses and other sharks

Dusky sharks are big ocean predators that can reach up to 400 lbs. They are found in tropical and subtropical waters around the world and make long seasonal migrations all the way from the equator to the poles. Despite their massive migrations, females stay close to home when it comes time to give birth—they’ll often stay near where they were born. Dusky sharks don’t reach sexual maturity until they’re 20 years old, and females give birth only once every three years. That’s because females have a gestation period of 22 months—that’s almost two years! Each litter is six to 12 baby dusky sharks, and they will hang out in inshore nurseries until they’re big enough to venture out in the open ocean. These young sharks have to be careful that they aren’t eaten by larger sharks like bull sharks. By the time they reach adulthood, no one is really big enough to mess with them!

Although dusky sharks rarely interact with humans, their size and proximity to shore could potentially be dangerous. Shark attacks are very unlikely, however, and it’s important to remember that when we are in the ocean, we are a guest in their home.

Dusky sharks are under threat from overfishing (including when they’re accidentally caught as bycatch), pollution and habitat loss. Because they are slow growing and late to reach maturity, it can be difficult for them to rebuild their declining numbers.