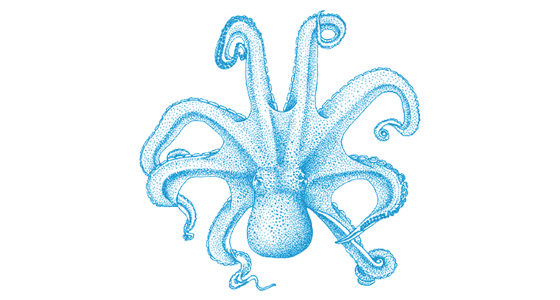 Giant Pacific octopuses are cephalopods (meaning “head-foot”) and are related to squid and cuttlefish. The name “cephalopod” comes from the fact that their arms are connected directly to their heads. Contrary to popular belief, octopuses’ eight appendages are called “arms”, not “tentacles”. The giant Pacific octopus is the largest and longest living of all octopus species. On average, they are about 12 feet in length and weigh more than 50 pounds.

Giant Pacific octopuses reproduce towards the end of their lives, when a female chooses a large male to mate with. After mating, a female can store the male’s sperm for several months before deciding to fertilize and lay her eggs. Females will then lay tens of thousands of eggs and keep them safe in a small den. The female octopus will sit on her clutch of eggs for six to seven months—not even leaving for food. After the eggs hatch, the female octopus dies. Talk about motherly dedication!

Octopuses are incredibly smart, and giant Pacific octopuses are no exception. They can learn to solve mazes, open jars, recognize people’s faces and even escape enclosures. Octopuses are the only invertebrates known to exhibit play behavior, and sometimes individuals in captivity will pass the time by playing with toys.

Unlike others in the mollusk family (like snails and oysters), octopuses don’t have a hard, external shell to protect themselves from predators. So, they must get creative. Giant Pacific octopuses have a series of cells called chromatophores that allow them to change colors based on their surroundings, allowing them to camouflage. When they’re not trying to hide, giant Pacific octopuses are reddish-brown in color. They can also squeeze into tiny nooks and crannies to hide from predators—meaning you could swim by one and not even notice!

Giant Pacific octopuses are venomous. Although other cephalopods are notorious for their dangerous bites (blue ringed octopus, anyone?), it turns out all octopuses and cuttlefish are venomous. They inject their venom into prey with their sharp beaks.