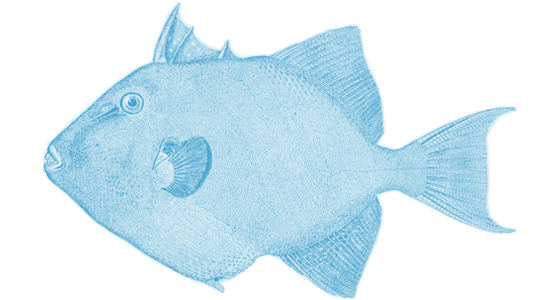 Prefer hard bottom habitats like wrecks, reefs and rock outcroppings in depths around 150 feet, but they can be found up to 300 feet. Juveniles can be found hiding in Sargassum seaweed mats.

The grey triggerfish has a unique, recognizable shape: it has a pointed face and a laterally-compressed body, meaning it is much taller than it is wide. They have two dorsal fins, one that contains three spines and a second that looks like your more typical fish fin but moves in an undulating motion. When the fish is triggered (so to speak) by a predator, it will dart into a small crevice and fan out its spines to wedge itself in place. Triggerfish can also change colors to blend into their surroundings, making it even harder for predators to spot. They are preyed upon by larger fish, including sharks and grouper.

Grey triggerfish have small mouths but strong jaws. They use their sharp teeth to drill holes in the shells of prey like mussels and urchins. They will hover above the sand to search for prey, and sometimes will use their teeth to grab prey, turn them over, then ram forward and crush the underside of their shells.

Females can produce between 50,000 and 100,000 eggs per season. These are protected by a nest in the sand that the parents take turns protecting before they hatch a few days later.

Gray triggerfish are a favorite in both commercial and recreational fisheries. There are two stocks (subpopulations) of gray triggerfish—the South Atlantic stock and the Gulf of Mexico stock. These two are managed separately since they have different factors that contribute to the health of the stock. The Gulf of Mexico stock used to be overfished but thanks to regulations under the Magnuson-Stevens Fishery Conservation and Management Act (MSA), their numbers have gone up and are no longer considered overfished. There is still more work to do, however, and the stock continues to be regulated through a rebuilding plan, which is a group of legal measurements intended to increase stock numbers.