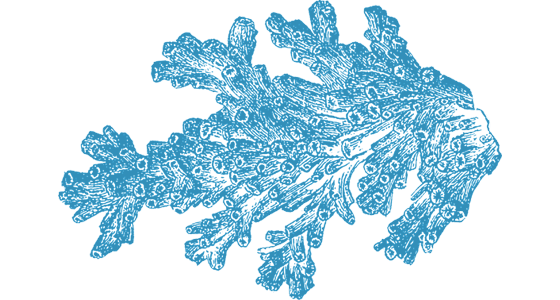 Around the world, in tropical and subtropical waters

From symbiotic algae called zooxanthellae, and sometimes from zooplankton that drift by

Hard corals are known for being the building blocks of colorful reefs in tropical waters around the world. Although they look like small plants, they’re made of tiny animals called coral polyps. Coral polyps are soft-bodied but secrete limestone skeletons for support. Coral reefs are formed when many polyps come together and build on one another. The result is a colony of polyps that act as one organism. Then, many colonies of different types of coral make up the coral reefs we know and love.

Coral polyps are actually see-through, and get their colorful hues from algae called zooxanthellae. Polyps and zooxanthellae have a symbiotic relationship, meaning both organisms benefit—coral polyps get food from the algae, and in exchange provide protection with their hard limestone skeletons. When corals get stressed out by pollution or high temperatures, they kick the zooxanthellae out. This is called coral bleaching and can kill the corals if it goes on for too long.

Coral reefs are called “the rainforests of the sea” for good reason! Coral reefs only take up about 1% of the ocean floor, but host about 25% of all ocean species. They provide complex, three-dimensional habitat for a huge variety of plants and animals—large and small—and protect many young fish species as they grow.

Coral reefs are also kind of like speed bumps—their structure helps slow down and shrink waves as they hurtle towards shore, which helps protect coastlines from hurricanes, cyclones and tsunamis. Coral reefs protect shorelines in 81 countries around the world, sheltering the 200 million people living along those coasts. On top of all that, they provide services for countless coastal communities by providing food, recreation, tourism, jobs and more!

Unfortunately, stressors such as climate change, ocean acidification, diseases, overfishing, sedimentation and pollution have degraded reefs around the world. Some fared worse than others: Elkhorn (Acropora palmata) and staghorn (Acropora cervicornis), two species of reef-building corals, have declined between 92-97% since the 1970s. On top of it all, the ocean is acidifying due to increased carbon dioxide, making it harder and harder for corals to build the physical structure of the reef. Thankfully, people are hard at work trying to replenish coral populations with coral reef nurseries to ensure they survive for generations to come. However, the best way we can help corals—and the animals that depend on them—is by cutting carbon emissions and limiting the effects of climate change.