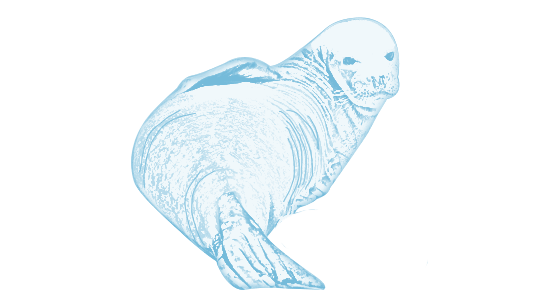 Hawaiian monk seals spend two-thirds of their time out at sea and typically look for food in waters around 60-300 feet deep. The rest of the time you can find them resting on sand and rock on islands

Hawaiian monk seals like to munch on fish, octopuses, eels and lobster

You may have heard of Hawaiian monk seals because they’re one of the most endangered marine mammals in the world. Hawaiian monk seals are mainly threatened by entanglement in fishing gear, food availability, disease and predation, and although many protections are in place their numbers have continued to fall. Hawaiian monk seals certainly struggle with marine debris: the Northwestern Hawaiian Islands act like a net in the North Pacific, ensnaring large amounts of drifting fishing gear and debris on its fringing reefs and sandy shores. The daily accumulation of large amounts of debris—almost entirely plastics—on Midway’s shores bothers Hawaiian monk seals as they haul out on its beaches and forage in the atoll’s shallow waters. With only about 1,400 Hawaiian monk seals remaining, it’s more important than ever to keep their habitat healthy and trash free! Other monk seal relatives are even bigger trouble—there are only 300-600 Mediterranean monk seals left, and the Caribbean monk seal went extinct in the 1970s. Fortunately, recent studies are showing a small but steady increase to their population in the Hawaiian Islands.
DONATE NOW

Hawaiian monk seals get their name from the folds of skin that resemble a monk’s robe, and they’re typically spotted alone or in small groups of seals.

Some of their habitat was protected in 2016. When President Obama established the Papahānaumokuākea National Monument, he set aside an area that’s 582,578 square miles! That’s nearly four times the size of California, 105 times larger than Connecticut and ten times larger than Iowa.