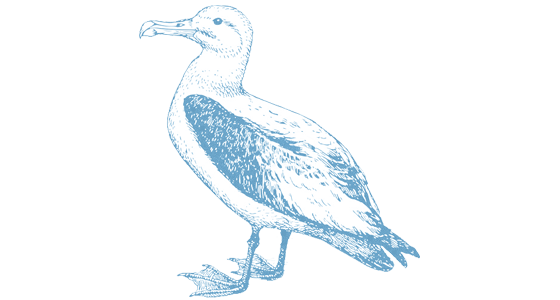 Laysan albatrosses can live more than 50 years—the most famous is Wisdom, a 66 year old female that is still laying eggs on Midway!

Laysan albatrosses like to spend their time in open ocean, except during breeding season when you can find them in sandy and grassy areas on islands.

Laysan albatrosses live in the Northern Hemisphere, particularly on islands in the Hawaiian archipelago.

If you want to hang out with a Laysan albatross, your best bet is visiting Midway Atoll. This tiny island is home to the biggest group of them in the world—it’s essentially a big family reunion! Laysan albatrosses manage to cram more than 450,000 nesting pairs (that’s nearly 1 million birds) into a 2.4 square-mile area by nesting in every available nook, from abandoned WWII gun turrets to grassy cracks in the pavement.

After having been severely threatened by feather hunters, Laysan albatross populations have since recovered to about 600,000 breeding pairs. But that doesn’t mean they’re in the clear: Laysan albatrosses are seriously threatened by marine plastics. When they’re out at sea foraging for food to feed their chicks, they often ingest plastics by mistake. They return to regurgitate this food-and-plastic mixture for their chicks, who then eat it too. Chicks often die due to starvation, stomach rupture or asphyxiation from the plastics.

When young albatrosses are old enough to leave the nest (at about 5 1/2 months), they spend the next three years at sea. They will sleep and eat at sea, not touching land for years.

One thing you should know about Laysan albatrosses: They’re quite romantic. Writer Noah Strycker puts it best: “There’s love, then there’s albatross love.” The Laysan albatross might have one of the most intense love affairs on the planet.

Most of them mate for life and are incredibly dedicated to their partners. Laysan albatrosses also take courtship very, very seriously: they can spend years learning the right mating rituals to attract the perfect mate. Once they encounter a potential partner, they engage in an elaborate dance that involves tapping their feet close together, pointing their beak at the sky, extending their wings and calling to the sky. It’s not unusual for Laysan albatrosses to engage in a few dances before deciding on their partners, but once they’re matched, they will stay faithfully together until death.