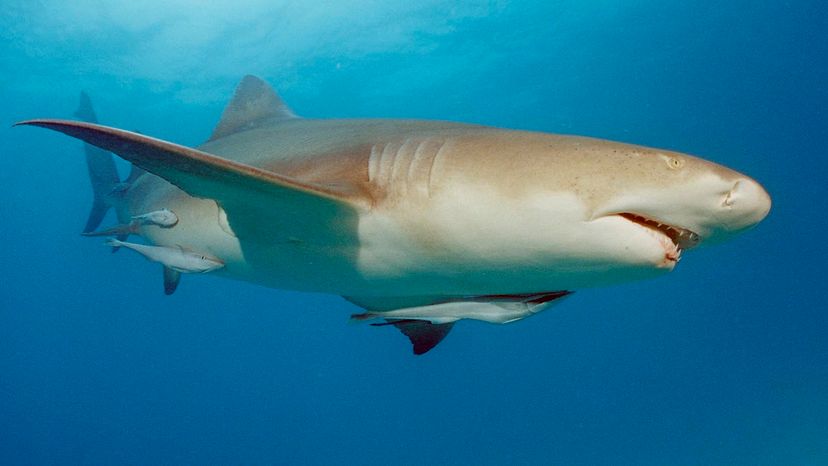 Up to about 30 years

Along sandy bottoms in inshore habitats like mangroves and reefs

Tropical and subtropical zones in the Atlantic and Pacific

The silhouette of a massive shark lurking below the ocean’s surface doesn’t exactly conjure up images of a laid-back creature that prefers to chill with its posse. But research shows there’s a yellow-hued giant — the lemon shark (Negaprion brevirostris) — who isn’t a fan of aggression and seems to have quite the social life.

Lemon sharks hang out in subtropical, coastal waters and can grow up to 10 feet (3 meters), weigh up to 551 pounds (250 kilograms) and live to be up to 30 years old. Besides sporting an unusual skin color for a shark, they’re recognizable by their short, blunt snout and two similar-sized triangular fins on their back, positioned behind the pectoral

Why Are They Yellow?

Lemon sharks aren’t necessarily as brightly colored as their name suggests, but their yellowish-brown hue is still noticeable — and quite valuable to this shark in terms of survival. The color helps the sharks blend in with the sandy seafloor, making it a whole lot easier to catch their next meal.

What’s on Their Dinner Menu?

Lemon sharks mostly chow down on bony fish, crustaceans and an occasional seabird, but they’re also part of the 1 percent of fish that practice cannibalism — large adult lemon sharks are known to eat smaller lemon sharks or babies.

We humans may not be on their dinner menu, but in some areas, they’re on ours. Lemon sharks are hunted commercially and recreationally, and their fins are sold for shark fin soup — an often illegal delicacy — and their skin is sold for leather. 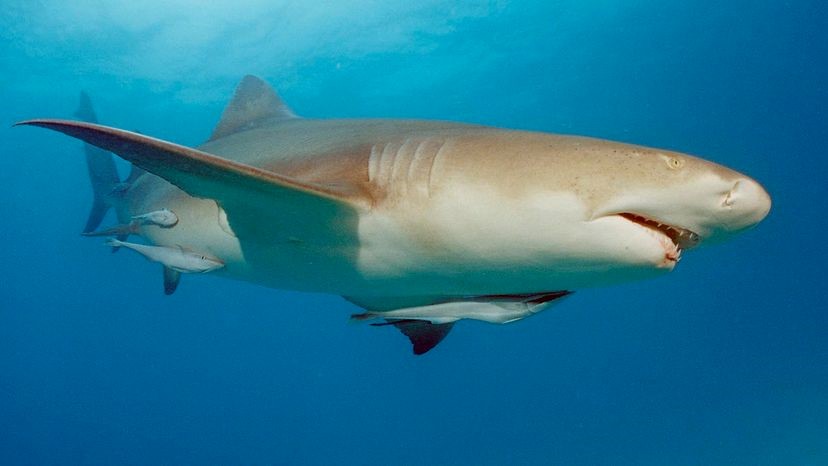 A lemon shark swims in the Atlantic Ocean off the coast of Grand Bahama Island.

Given their penchant for subtropical shallow water, they’re in frequent proximity to swimmers, surfers and divers. But according to the International Shark Attack File, there have been only 10 attacks ever documented on humans by lemon sharks — and none were fatal. While they do seem a bit like the Casper the Friendly Ghost of the sea, it’s important to remember lemon sharks are predators near the top of the ocean food chain and could still bite when they themselves get spooked.

They don’t exactly get together for a night out on the town, but there’s growing evidence that many sharks — the lemon shark included — are quite social and hang out in groups. “Juvenile lemon sharks do show evidence of being social, both in captive and wild settings. This is most likely defensive and increases their chance of seeing an incoming predator. However there may be other advantages as well. The adults appear to be less social, but again there do appear to be times (and locations), where they form groups,” explains Yannis Papastamatiou, Florida International University associate professor in biology, in an email interview.