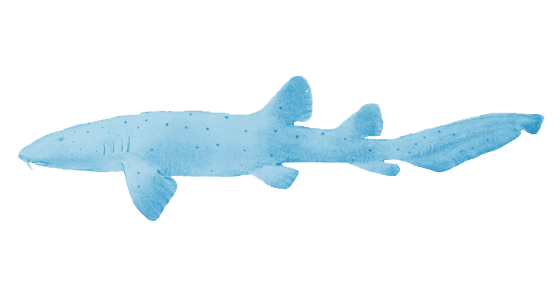 Nurse sharks prefer to stay close to the seafloor in warm, shallow waters

Nurse sharks look somewhat different from other sharks—they don’t have the big, fierce jaws and quintessential body shapes that other more familiar sharks have. Instead, you can recognize them by their broad, flat heads and large, flexible tail fins. Nurse sharks have a set of small (but sharp!) teeth and barbels that hang from their chins, like catfish, that help them sense prey in the sand.

Nurse sharks are among the most-seen sharks by divers in the Western Atlantic. As long as you don’t step on them, human encroachment doesn’t bother them much—nurse sharks are mostly harmless to humans. Humans can be harmful to nurse sharks, though—while they’re not often captured for food, they are sometimes captured for the ornamental fish trade and as bycatch. Nurse sharks also live in coral reef ecosystems that are impacted by nutrient run-off, pollution and more.

Nurse sharks are complete night owls. During the day, they prefer to rest on the seafloor, sometimes in piles of their fellow nurse sharks. But don’t let their daytime sluggishness fool you—at night nurse sharks are incredibly active and roam the sandy bottoms for prey. While they’re active, some of their prey fish are resting, which makes it easier to snag them. When nurse sharks find something they want to eat, they cup their mouths over the area and expand their throats which makes a vacuum to suck the prey out of its hiding place.