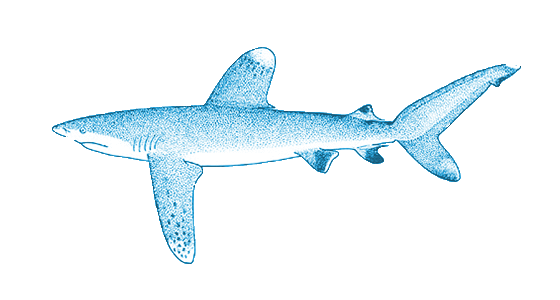 Tropical and subtropical waters around the world

Oceanic whitetips used to be among the three most abundant shark species, but now their populations are dwindling. Decreasing numbers spell trouble for the entire ocean ecosystem—removing a top predator like them can have serious ripple effects on their prey and other ocean creatures in the food web.

Oceanic whitetip sharks are found all over the world—they used to be one of the most abundant shark species in the ocean. Unfortunately, their populations have decreased by about 70-80%, leading them to be listed as “Threatened” under the U.S. Endangered Species Act. This is primarily because they have been caught in large numbers as bycatch or harvested for the shark fin, skin and oil trade.

Oceanic whitetip sharks have a long road ahead of them before their population recovers from historical fishing pressure. Like many other sharks and large animals, it takes years for them to reach the stage where they can reproduce, and even then, they have only one to 15 pups at a time. That means it will take many generations of protection and good management for them to rebuild their populations. Female oceanic whitetips are typically larger than males; oceanic whitetips can grow to more than 11 feet.