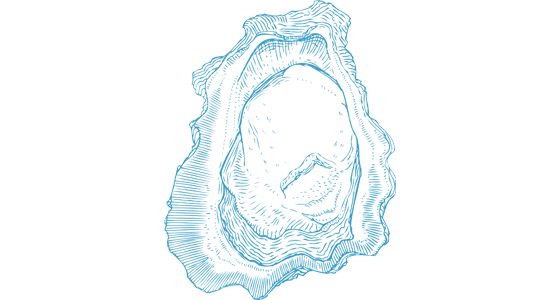 As babies (called spat), oysters settle on top of other oysters on the seafloor to form oyster reefs. Oysters can also be grown by humans in oyster farms.

In the Atlantic, oysters range from Canada to Argentina, and in the Pacific, from Japan to Washington state and even as far south as Australia.

Oysters are filter feeders and pass water over their gills to get oxygen to breathe and plankton to eat.

Oysters are among the hardest working animals in the ocean. As adults, oysters can filter 25-50 gallons of water each day. Back in the day, the entire Chesapeake Bay could be filtered in just five days before oyster populations dropped to just 1% of their historic levels. In fact, oysters are part of the reason the Chesapeake got its name—it’s an Algonquin Native American word that means “Great Shellfish Bay.”

Because oysters filter massive amounts of water, they are vulnerable to what ends up in the ocean. Their numbers can drop if there are increased amounts of runoff or coastal erosion (which is when you would want MORE animals filtering the water). Oysters also can collect toxins in their bodies which can be harmful for the humans who eat them.

Oysters do much more than filter water, though. Oysters latch onto each other to form big reefs that provide shelter for fish and crabs and that stabilize muddy estuary bottoms. Also, filtered water provides better conditions for seagrass, a crucial habitat and breeding ground for animals like rockfish and blue crabs to grow.

Oysters are very popular food items and are a huge source of business for growers in the United States and abroad. AND oysters have been popular for a long time—ancient piles of shells dating back to 6950 BCE were found in New York state, representing the oldest traces of human activity found in that region.

Unfortunately, oysters are particularly vulnerable to ocean acidification, which occurs when carbon pollution is absorbed by the ocean and the water becomes more acidic. This makes it harder for oysters to build their shells, which is bad for the environment and bad for business! The good news is that states like Washington, Oregon, California, Maine, Florida and Maryland are taking action to tackle acidification.