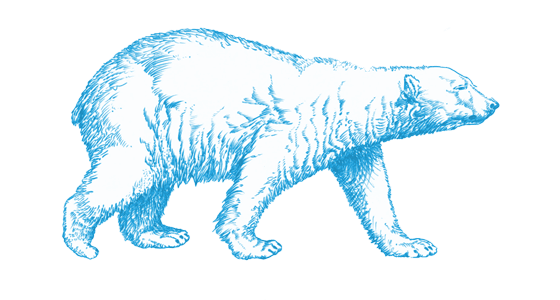 Polar cod can be found in a diverse range of Arctic habitats during different life stages, including open and nearshore waters, shallow and deep waters, brackish lagoons, river mouths and other habitats. Polar cod are also the only fish species living inside the Arctic pack ice!

Needless to say, they live in the Arctic.

Although they may not be the most charismatic Arctic species, polar cod play a huge role in the marine ecosystem. Polar cod are among the most abundant fish in the circumpolar Arctic, occurring in all corners of the region in icy, sub-zero waters. They are able to thrive in such cold waters because polar cod produce something called a glycoprotein which serves as antifreeze in their blood. This is an amazing evolutionary feat.

Polar cod have huge appetites. When large schools of polar cod get together, they can sometimes feed so aggressively that they cause local depletions of zooplankton. But by ingesting all that food, polar cod grow large enough to serve as a high-energy food source for seabirds and Arctic marine mammals like ringed seals, narwhals and beluga whales.

In ice-free waters, polar cod come together in gigantic schools, but when under the ice, they hide in the cracks from predators.

The Arctic pack ice is an important habitat for polar cod to mature as young fish, and as they get older the ice still serves as a safe haven from marine mammals and sea birds that prey on them. Plus, there are no other fish to compete with for resources there, because no other species can handle these very cold temperatures. Polar cod populations are directly impacted by formation and break-up of seasonal polar ice.

Unfortunately, this dependence on sea ice poses problems. The Arctic is warming more than twice as fast as the global average because of climate change, and sea ice habitats are rapidly disappearing. Failure of sea ice formation can cause huge problems for polar cod. Diminishing sea ice habitat makes it harder for them to reproduce, which decreases their numbers overall. This, in turn, affects all other species that rely on polar cod for food. Additionally, as water temperature warms in the Arctic, sub-Arctic species will be able to move northward and compete with polar cod for food.

One thing is for certain: without polar cod in the food chain, the Arctic ecosystem would be drastically different.