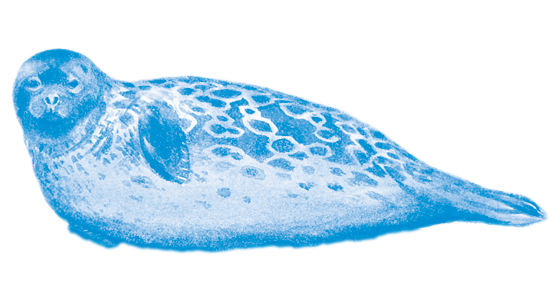 Ringed seals tend to stay near icy shores, but with their ability to excavate ice, they can venture much farther out than other seal species.

Ringed seals are the smallest seal species—and possibly the cutest. Their name results from the light-colored circular patterns that appear on their backs. What makes ringed seals really stand out, however, is their ability to build breathing holes. Ringed seals can use the claws on their front flippers to excavate ice, enabling them to live farther from the shore. During dives, ringed seals can reach depths of 300 feet and hold their breath for 45 minutes. Ringed seals must be careful before resurfacing though as there are predators like polar bears trying to catch them for food. The Arctic is heating up fast. The largest threat to the species is climate change, affecting both their habitats and the food they eat. As sea ice melts, more water is opening up for ship traffic and oil drilling, posing a threat to Arctic wildlife. With increasing ship traffic comes more noise and water pollution and a higher risk of damaging oil spills.

In the spring, male ringed seals have darker faces than females due to an oil gland secretion. Indigenous hunters avoid these breeding seals because they have a strong and unpleasant smell.

Ringed seals are solitary creatures, enjoying their alone time. The only time ringed seals interact with other seals is during mating season. They gather on the sea ice to breed, molt and rest together. If there is enough snow, they build snow caves or lairs around their breathing holes and then guard them furiously.