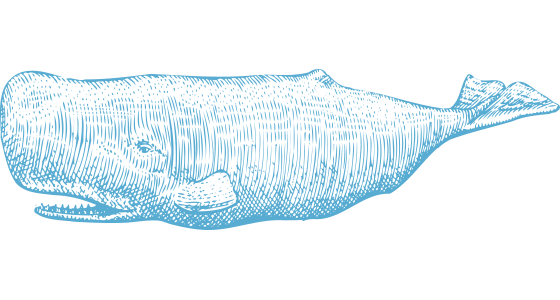 Females and calves stay in tropical and subtropical waters, and males migrate to higher altitudes

Thousands of pounds of fish and squid per day

Sperm whales are the largest of the toothed whales! They are so big that they are longer than the average transit bus, with males growing to be on average 60 feet long and females growing to 37 feet. Their heads are huge, making up one-third of their bodies. Despite their big heads, their eyes are quite small and unrecognizable to most people.

Sperm whales are unique in many ways, aside from their size. For example, they have one blowhole located at the left of their forehead that they use to project their blows forward and at an angle. Most other whales don’t have this feature. Sperm whales’ blowholes act as nostrils would and allow them to get air into their lungs to breathe.

Sperm whales got their name because they have an organ inside of their heads that is called the spermaceti organ. This organ contains a reserve of high-quality oil that they use to aid in echolocation. This became a huge problem for sperm whales once humans discovered this source—whalers like to hunt sperm whales for their oil and blubber!

Sperm whales are very vocal and emit a series of “clangs” or “clicks” that are used for communication and echolocation. Echolocation happens when they emit sounds that travel through the water and help them figure out the location, size and shape of objects in their paths.

Sperm whales stick together. As many as 20 sperm whales travel together in what is known as a pod. However, pods are made up of females and their young; most males prefer to roam solo or “pod-hop.”