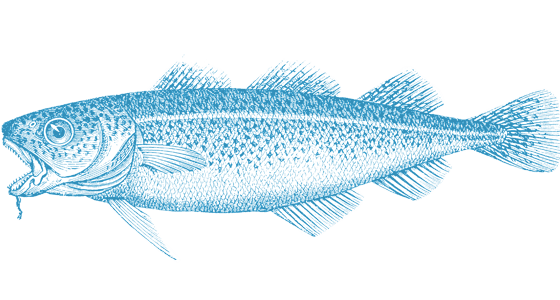 Close to the ocean floor in relatively shallow waters

In the Atlantic from Greenland to North Carolina

A variety of fish and invertebrates

Cod are one of the most popular food fishes in the Atlantic. They have been an important food source for Native communities, including the Wampanoag of modern-day Rhode Island and Massachusetts. Historically, cod was also a favorite of European settlers as they learned to sustain themselves in North America. You can recognize them by their greenish-brown color and barbels on their chins (they look kind of like whiskers). In addition to being a favorite food item, they are important predators in the ocean. Unfortunately, cod numbers have been dropping due to overfishing. This makes the ecosystem get out of whack—since there’s not enough of cod to eat enough prey (such as urchins, shrimp and lobsters), the prey populations expand.

Cod can change color! Cod can vary from a grey-green color to a reddish brown.

Cod used to be so abundant that you could scoop them up in buckets from the boat. Fishing pressure increased dramatically—which was great for early traders who shipped salted fish back to Europe, but bad news for Atlantic cod populations. Generations of harvesting and increasingly sophisticated fishing methods led to plummeting cod stocks. In the 1990s, the Grand Banks cod fishery crashed. Moratoriums were put in place in some areas, but lots of stocks are still in rough shape and don’t seem to be rebounding.