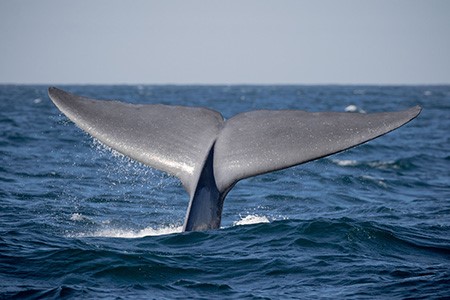 The gentle giant of the sea, the blue whale is instantly recognisable with a long, streamlined shape, mottled blue or grey back and pale underbelly. They each have huge heads that are broad, long and have a unique U-shaped arch, and can reach up to a quarter of their body lengths in size. Famous for their sheer mass, blue whales glide effortlessly through the ocean, dwarfing all else in their path. Commanding awe, they grow to over 33 meters long (around 100ft) – twice as along as a T-Rex dinosaur. Even their calves are a whopping 7 meters in length, weighing in the same as an adult African elephant.

Life for a blue whale should be quite long. A normal life span is up to 90 years, though one famous whale lived for 110 years.

Reproducing once every two or three years, female blue whales carry their young for 12 months before giving birth. Maintaining a strong bond, young calves stay close to their mother’s side for around seven to nine months before being weaned. Learning and growing is thirsty business for a baby blue whale, they can drink up to 250 liters of milk every day.

Blue whales are also great travelers and pods undertake an endless cycle of migration, heading to cold waters to feed and then warmer waters to breed and look after their young. They eat very little en route and survive mostly on their blubber reserves, for up to four months at a time. Whether they are traveling or not, blue whales like to communicate with each other. Sometimes, they talk to each other over hundreds of miles producing songs and sounds of up to 188 decibels. That’s louder than a jet plane!

What do blue whales eat?

Ironically, the largest animal on the planet survives by eating one of the smallest. Feasting mostly on krill – a tiny shrimp like creature found in great clouds in the ocean – blue whales can eat as many as 40 million a day. Scooping them up in huge mouthfuls of water, they filter out the krill from the seawater through curtain-like teeth known as baleen, releasing the water back into the sea.

Where do blue whales live?

Although once upon a time there may have been over 350,000 blue whales in our oceans, pre-industrial hunting decimated their populations and now there are only between 10,000 and 25,000 left.

Preferring to live in deep ocean, blue whales are rarely seen close to shore. In the Northern Hemisphere, they can be seen in the northeast Pacific, from Alaska to Costa Rica, and migrate towards the northwest of the Pacific too. In the North Atlantic Ocean, blue whales can be found near Greenland, Newfoundland and Nova Scotia. In the Southern Hemisphere, small populations remain in the Antarctic, as well as parts of the Indian Ocean.

How much does a blue whale weight?

How long does a blue whale live?

The oldest known blue whale was around 110 years old; however, up to 90 years old is thought to be more normal.

What does a blue whale eat?

Despite their enormous size, they feed on tiny shrimp-like crustaceans called krill (as many as 40 million every day) which they scoop up in huge mouthfuls and sieve from the water using their baleen.

Make a splash with these blue whale resources: