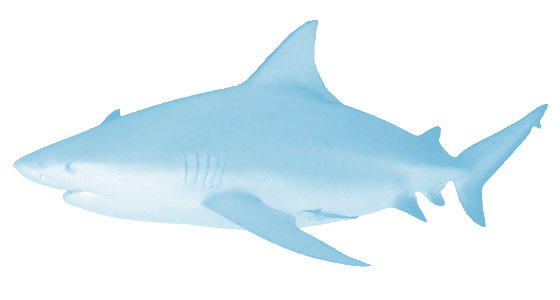 Coastal regions in tropical and subtropical waters, and sometimes even in freshwater rivers and lakes

A range of bony fish, turtles, sea birds, dolphins and even land mammals

As the name suggests, you wouldn’t want to put a bull shark in a china shop. Bull sharks can grow to almost 12 feet long and can weigh up to 500 pounds. They have rounded heads, small eyes and grey bodies with paler grey stomachs. Their name comes from their short, blunt snout and their habit of head-butting prey before they attack, kind of like a charging bull. And yes, they can be quite aggressive. Unlike most other sharks, bull sharks can venture out of saltwater habitats and handle brackish or even fresh water. They spend a lot of time on tropical shorelines, but have been spotted inland in rivers and tributaries, including in the Amazon River. Not expecting to see a big shark in your local river, huh? Bull sharks are excellent hunters. They are speedy, agile and prey on a number of species, including other sharks (sometimes even juvenile bull sharks!). Their eyes are relatively small, so they rely on other senses to hunt, especially in murky waters. These senses come in handy when females head to more turbid estuaries to give birth. The juvenile sharks stay in these waters until the temperature gets too chilly and they head to warmer offshore waters.

Bull sharks are agile animals, despite their size. Bull sharks have been spotted leaping up river rapids, almost like salmon, en route to inland lakes.

Bull sharks are considered “Vulnerable” by the International Union for Conservation of Nature (IUCN), meaning they face a high risk of extinction in the wild. Their numbers are declining largely due to fishing pressure, habitat loss and degradation and climate change. Because young bull sharks rely on habitats like estuaries and rivers, they are particularly affected by damage to freshwater and brackish habitats, too.