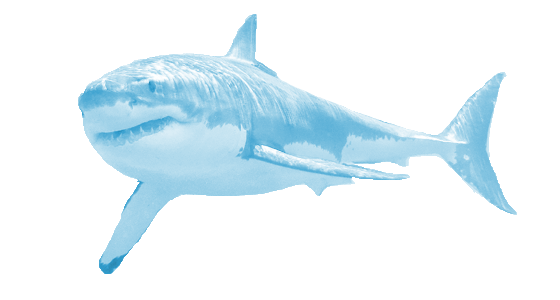 Adults venture out across the deep ocean, but juveniles stay closer to shore

Mostly in temperate waters, but will occasionally be found in warmer or cold environments, too

Fish (including other sharks), turtles, seals, sea lions and small cetaceans like dolphins

White sharks are some of the largest sharks in the ocean: They can grow more than 20 feet long and weigh more than 2.5 tons. That makes them the largest predatory fish in the world—even though whale sharks and basking sharks are bigger, they are filter feeders rather than active predators, like white sharks. Their bodies are designed for hunting: White sharks have an excellent sense of smell and sharp, serrated teeth that are perfect for capturing and tearing apart prey. Unlike many shark species that are cold blooded, white sharks are warm-blooded, meaning they can raise their internal temperature above the temperature of the water. This helps them have the energy to burst forward while hunting.

White sharks are mostly solo swimmers, but you can occasionally find them in small groups, especially if there is food around.

White sharks’ scientific name means “ragged-toothed.” It comes from the Greek word “carcharos” for ragged, and “odon” for tooth.

Many people view white sharks as “man eaters,” thanks to some dramatic representations in media and pop culture (looking at you, Jaws!). Although white sharks have more bites recorded than many other shark species, most aren’t fatal, and often happen because the shark mistakes a person for a food item like a seal.

The image that sharks are “man eaters” is detrimental and leads to fear of implementing much-needed conservation efforts. Due to intentional fishing or unintentional bycatch, white shark numbers have declined in some habitats up to 90% over the last 40+ years, and they are now considered vulnerable to extinction.