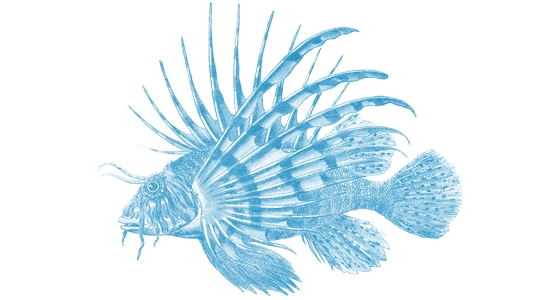 Originally form the Indo-Pacific region, lionfish are now in the Western Atlantic Ocean, Caribbean and Gulf of Mexico.

Lionfish eat many types of fish and invertebrates. They can eat animals up to half their size.

From their bold stripes to their sharp spines, lionfish are one of the flashiest fish in the sea! Their dramatic coloring makes them very popular in the aquarium industry (and understandably so, they’re spectacular to look at). But be sure to just look, and don’t touch: Lionfish spines contain a nasty neurotoxin that causes pain and swelling if injected. They use their spines as a defense mechanism from predators. Lionfish are considered quite a nuisance in some parts of the world. Although originally from the Indo-Pacific region, lionfish were released in the Atlantic through the aquarium trade. They are generalists, meaning they aren’t picky when it comes to their food, and made themselves at home in this new region. Now, you can find them through the Western Atlantic, Caribbean and Gulf of Mexico. They are designated an invasive species, meaning they are not native to the region and cause harm to the local ecosystem.

Some people have developed creative ways to keep lionfish off reefs in the invaded region. Lionfish Derbies are big fishing competitions where scuba divers and snorkelers use spears to collect as many lionfish as possible. Not only does it help keep lionfish off the reef, but they are also awarded prizes for most lionfish, largest and smallest lionfish and more.

Lionfish have voracious appetites (their nickname is “the Hoover vacuums of the sea”). In densely invaded areas, lionfish can consume 460,000 prey fish per acre per year, including ecologically and economically important fish like grouper and snapper. In some places they’ve reduced the native prey population by 90%. They’re not the only ones doing the eating, though. Lionfish are actually delicious, which has led some restaurants to serve them to help keep their populations down in the invaded range!