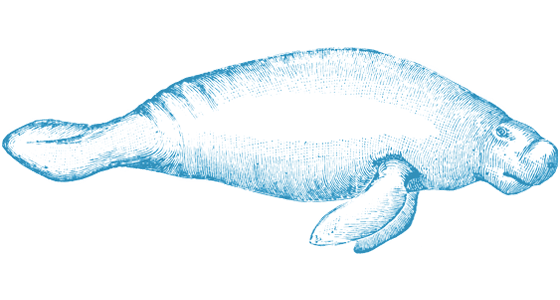 North American Atlantic coast from Florida to Brazil, as well as the Gulf of Mexico, the Amazon River and the west coast and rivers of Africa

Sometimes referred to as sea cows, manatees can grow up to 10 feet long and weigh up to 1,200 pounds. Manatees move slowly through canals and coastal areas at a rate of about five miles per hour. Don’t underestimate manatees though! At times, they can travel at speeds close to 15 miles per hour but only in short bursts. Manatees don’t like the cold very much, so to stay warm, they keep to waters that are at least 60 degrees Fahrenheit. Anything colder than that and manatees risk dying due to cold stress.

Each day, manatees eat around 120 pounds of food or about 10% of their body weight. Manatees’ favorite foods are different types of vegetation like seagrasses and mangrove leaves. They might ingest small fish or invertebrates occasionally, but mostly manatees stick to a vegetarian diet.

Manatees surface for air every three to five minutes and can stay submerged for up to 20 minutes while resting. Because they hang out in canals and shallow coastal areas, manatees often come in contact with boats. Colliding with motorboats is their biggest threat, along with other human-induced threats including fishhook ingestion and loss of habitat. You can help manatees by obeying local waterway rules and picking up your trash.

Manatees are distant relatives to elephants! Traits that they share are having a trunk (though that of manatees is smaller), tough skin, bristle-like hair covering their bodies, teeth that are continuously replaced and toenails on their flippers/feet. Manatees are also an important part of the ecosystem; without them, the seagrass would become too long and unhealthy. Seagrass plays an integral role in stabilizing the ecosystem because it provides food and shelter to other marine animals.

Manatees enjoy swimming alone or in small groups in shallow water (six to seven feet deep). When the water is warm and seagrass is plentiful, manatees have no complaints!